After stuffing our faces, we were on our way to stop #1 which had them all wondering what was going on as the GPS led us right into a cemetery. I assured them this was the place – the looks on their faces were funny. At the back of the cemetery is The Lincoln Tomb and War Memorials State Historic Site in Springfield, IL. It’s a quiet area for respect reasons. We walked up reading all the information (Hunter loves Abe) and looking at the massive size of the monument. It turned 9am while we were there and then the door opened on the monument. We walked in and around the monument and inside was where Lincoln and his family are actually buried. It was very cool yet very sad at the same time. Abe was a great guy. They had some of his speeches around and right before we left there was this one… you could read it as is today in eth same sort of situation (meaning running for office or at a presidential gala) and it holds exactly true of things going on today. It was a bit eerie. 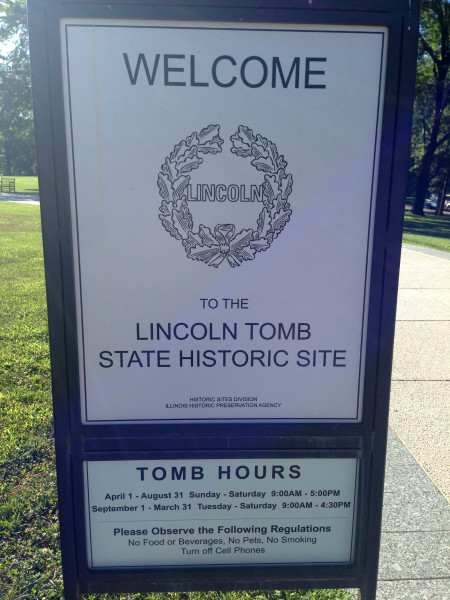 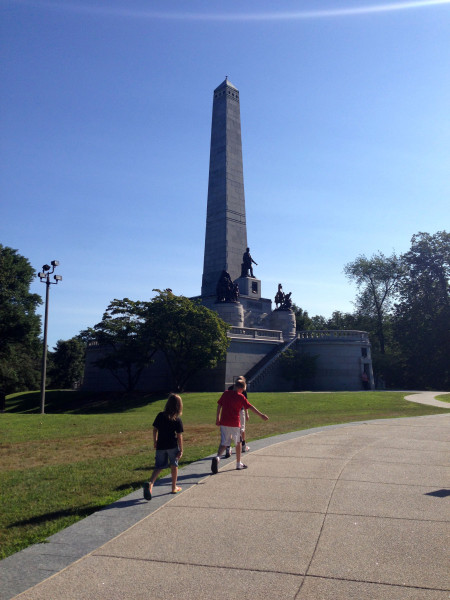 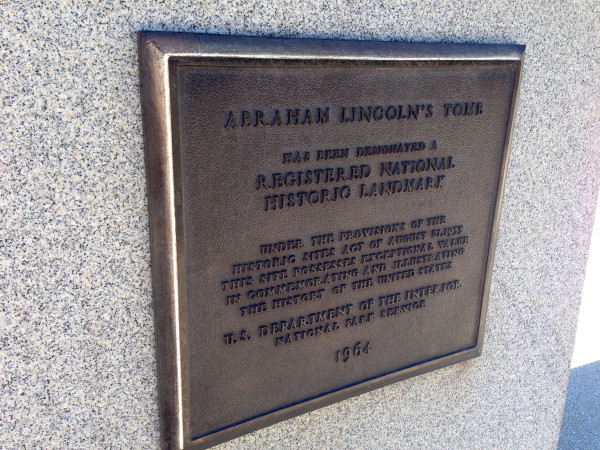 Then we went a few miles away to the Lincoln Home National Historic Site. Tours are free and book up very quickly, so instead of waiting, we just walked around ourselves (which meant we could not go into the Lincoln homestead though). That was enough for us though. They had ladies on the green with games kids would play at the time like race the bear up the tree (teaches how to milk properly), a ring toss, & rope jumping. It was fun. Then we walked into whatever houses we could and walked up and down the street. It was nice and relaxing. Just a piece of time frozen on that street in the middle of a bustling city. 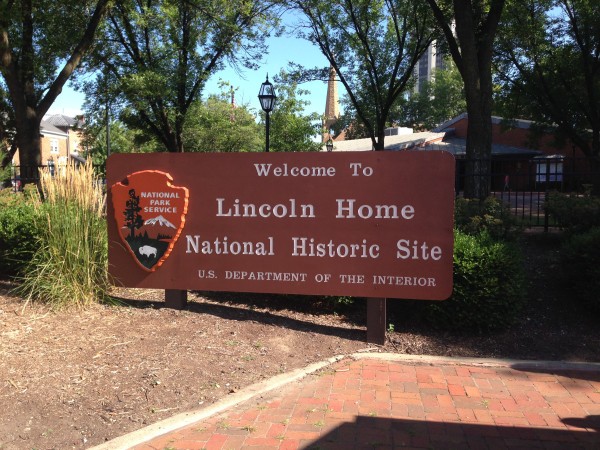 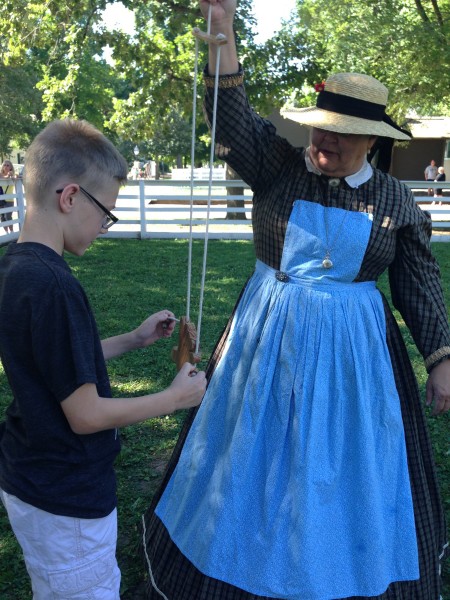 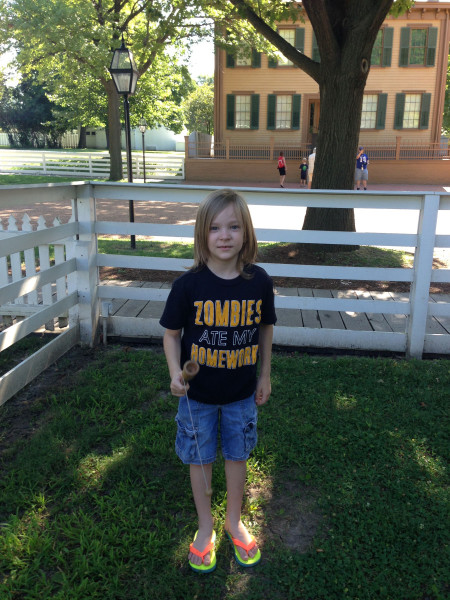 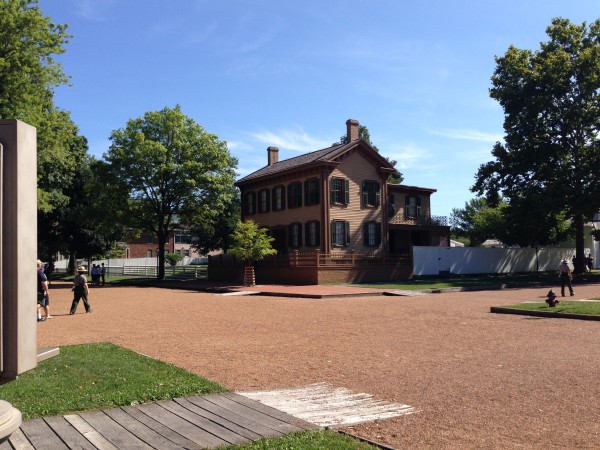 That type of history was over. Time for more recent history – Historic Route 66! We reiterated the sadness of the interstate system and what it did to local economies. Our 1st stop of on brief stint on the road would be an old-fashioned soda fountain called Doc’s Soda Fountain in Girard, IL. here, there is a small museum with artifacts from such a place. Moreover, they make REAL soda the old-fashioned way and the lady at the “bar” was very interactive. She showed the kids how it’s made and the steps along the way and why things were added. It was educational and super tasty. We took our drinks to go and were on our way to our next Route 66 stop. 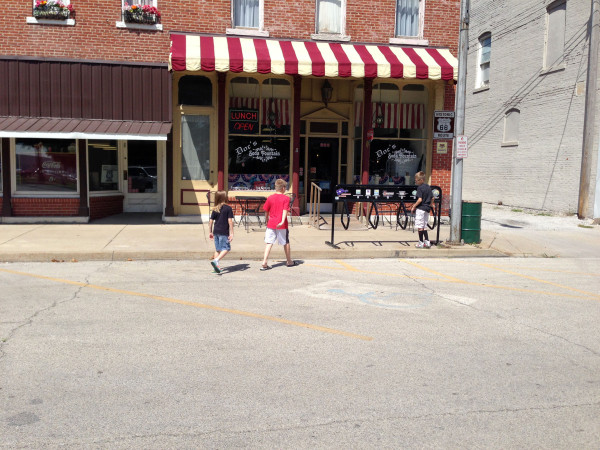 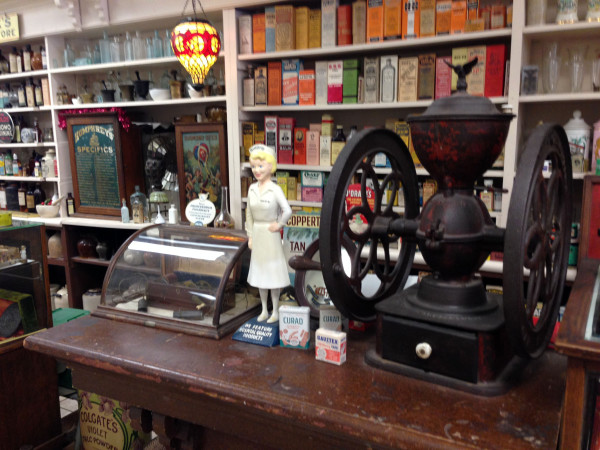 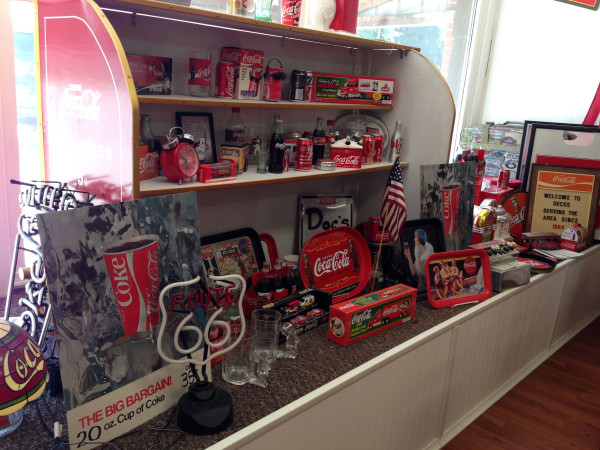 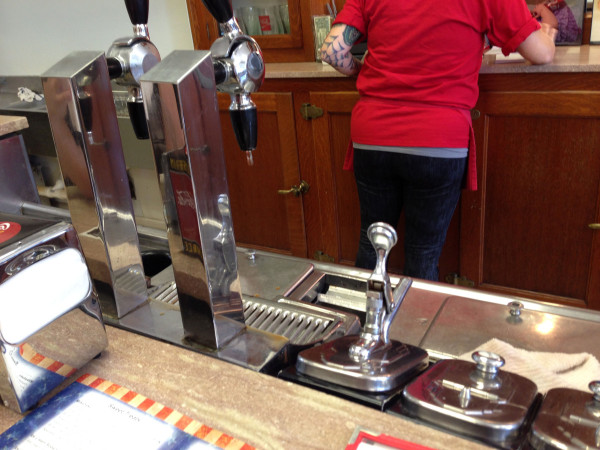 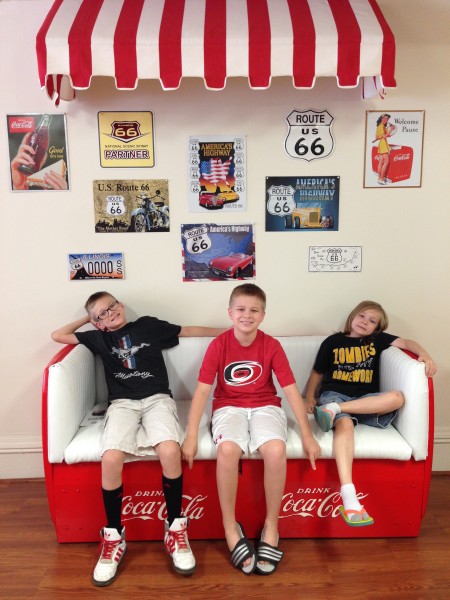 We weren’t sure where to park but once we did, oh boy! We arrived at Henry’s Rabbit Ranch in Staunton, IL This is a MUST go to! He rescues rabbits and loves them as his own children. He has a collection of rabbits (the cars) and other vehicles. Then we went inside to go into the store for the best surprise! Henry! He is so loveable and wonderful! He really loves where he is and enjoys every day with whomever comes into his place. He talked history, and loved on my boys. He brought out a rabbit to hang out with and that rabbit loved hunter (and vice versa). Henry took a picture of all of us with the rabbit. Cole took a lot of amazing pictures here as well. We spent maybe 20-30 minutes inside talking with Henry. This right here is America! He showed us the guestbook and so many people from other countries come to visit… it’s awesome and almost sad – sad, that more Americans don’t come by and see how cool their country really is 🙂 With huge smiles on our faces, we left and headed onto… 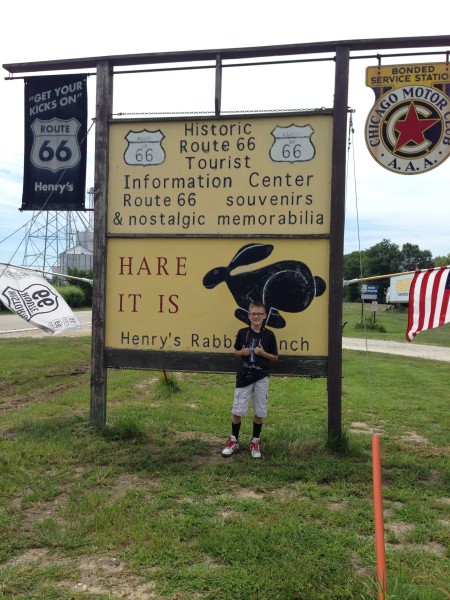 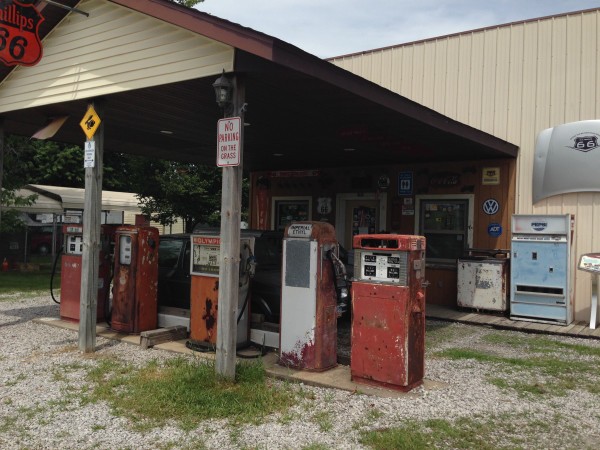 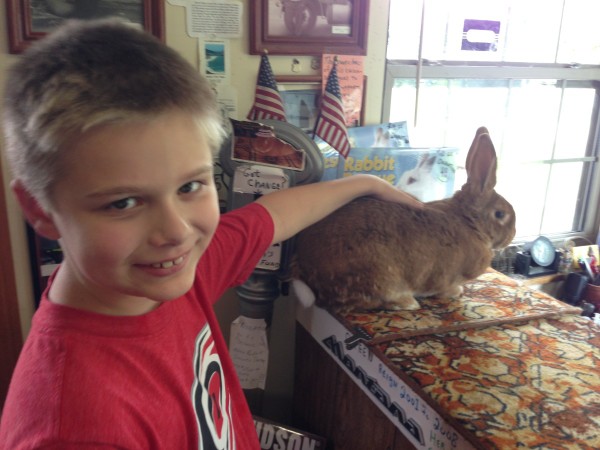 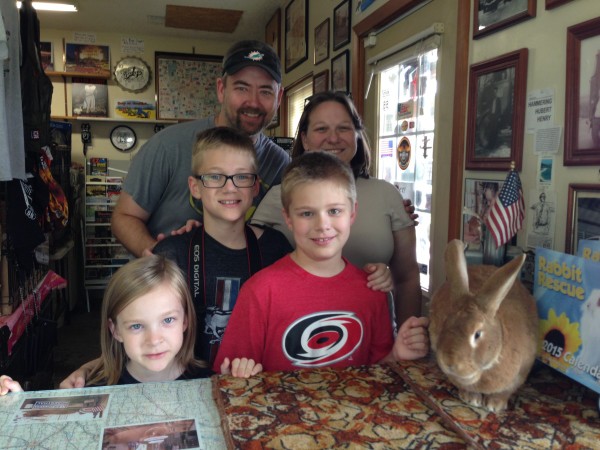 a place I picked just for picture purposes but ended up enjoying more than I thought. The Pink Elephant Antique Mall in Livingston, IL. It’s the largest antique store I have ever seen with some really awesome stuff. their prices are really good too!! Cole bought a license plate there… we could have spent like 3 hours there looking through stuff if we had the time, the money, and my allergies wouldn’t have tried to kill me. 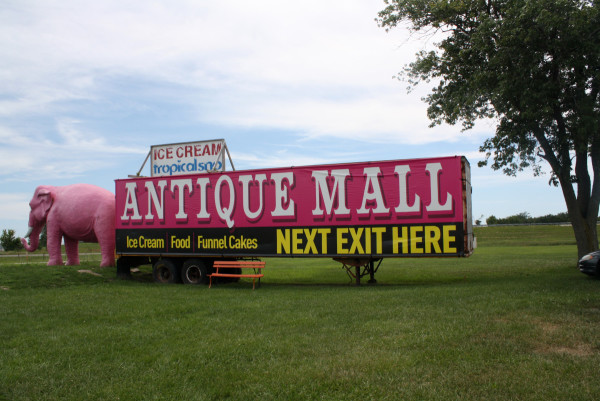 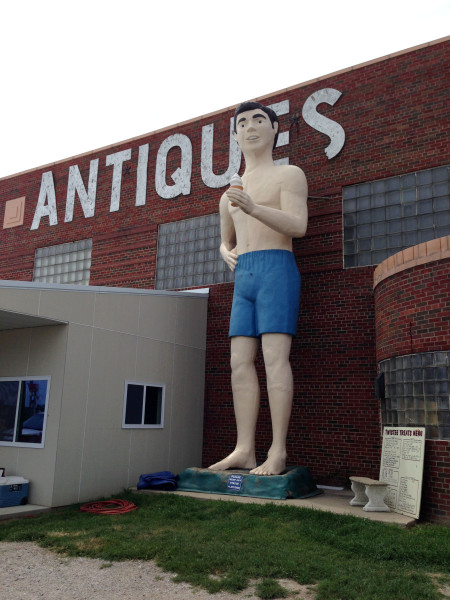 Then we headed to St. Louis, MO. We had wanted to go to the Anheuser-Busch Budweiser Brewery Experience but we didn’t end up staying. The tour wait was massive. The place was beyond packed. Probably because it was a weekend and a Cardinal’s game was that evening. Apparently they have a trolley that brings you from the stadium, to the brewery, and back to the park. Oh well, we saw an Anheuser Brewery in Merrimack, NH so it wasn’t a huge loss. No one really wanted to stop at the Arch. We have 2 claustrophobics who wouldn’t travel inside of it, so we just drove past it and snapped a picture and that was okay with all of us. 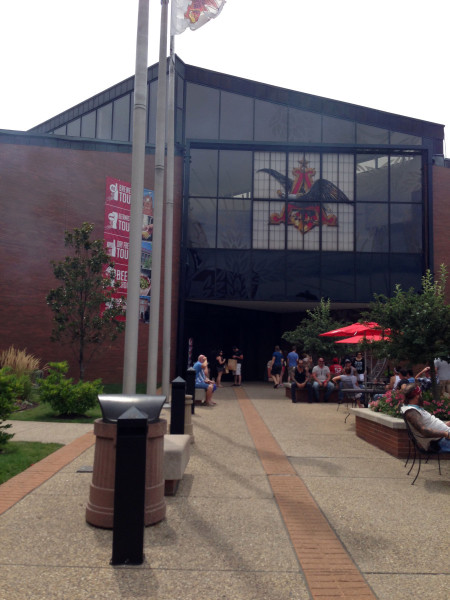 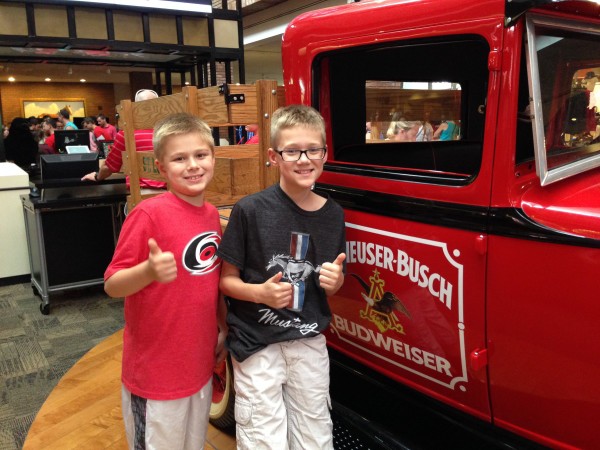 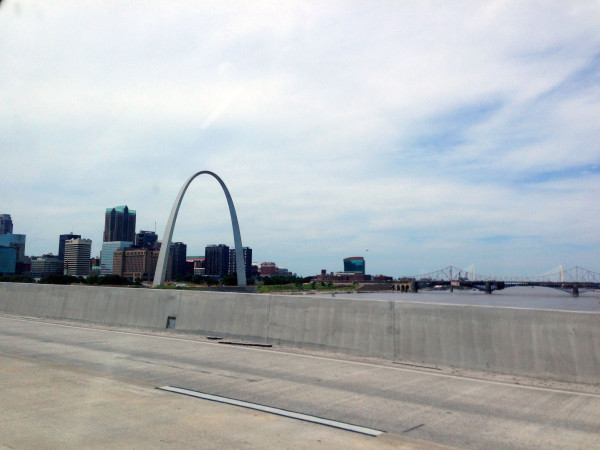 On our way to our next stop, we saw this – a large cross! Not just any cross – the World’s Largest – a symbol of God’s love for everyone right there on a major US-interstate for all to see. With the sun low in the sky, it was a pretty sight to see, even if going 70 mph past it. 🙂 “198 feet tall and 113 feet wide, forged out of over 180 tons of steel anchored in untold fathoms of cement, the cross can withstand winds hurled by evilest of forces at up to 145 mph. No two accounts agree on its cost; some estimates range into the multi-millions. But the Cross Foundation that built it says that 20 million people drive past the cross each year, and that a percentage of those people will see it and become good Christians, and that makes it all worthwhile.” 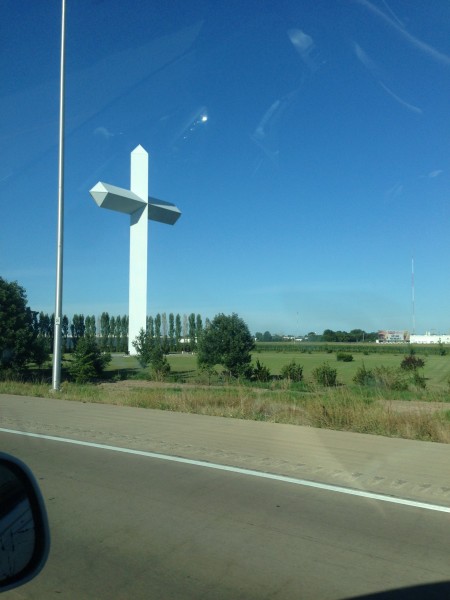 We headed to the town of Casey, IL. They have this amazing artist who has such pride in his town and for good reason. Anyway, the town boasts a giant pencil on Main Street, World’s Largest Knitting Needle & Crochet Hook, World’s Largest Golf Tee, World’s Largest Windchime, and they are building the World’s Largest Rocking Chair! First, we stopped at the Golf Tee. It was a bit late and they had an event going on. The Golf Tee is located behind the offices at the local Golf Course. Cole 7 I snapped a few pictures and moved on since it was crowded and we felt funny since they had a party going on. Then we headed down to the Windchime. You can actually ring it and everything! Was very pretty! Across the street, they were building the Rocking chair. Down there street is the pencil & hook. Nice pit stop for pictures. Cute town! 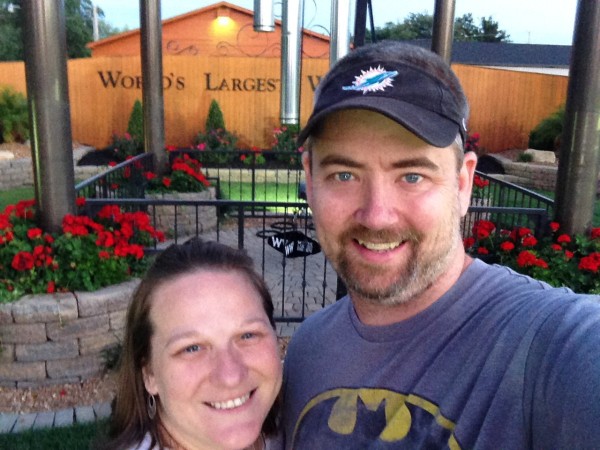 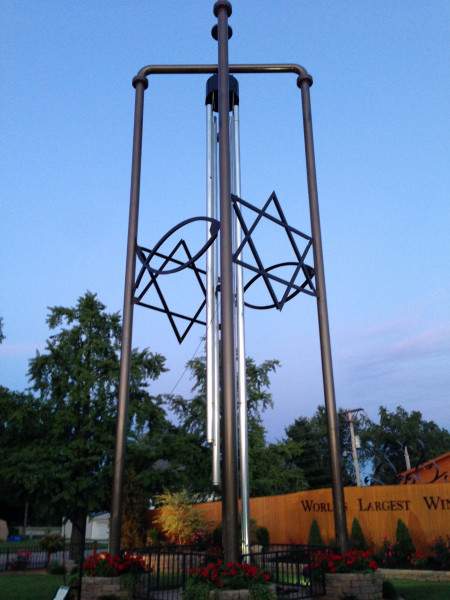 We jus found a cheap, clean hotel room to crash in for the night. Breakfast was meh, and hotel as alright. Certainly nothing compared to others on this trip. The Days Inn – Terre Haute in Terre Haute, IN also offers theme rooms like Ice Caves, Hawaii, Regular cave, Wild West… They seem to be rated decently. Mayb ethe hotel was better than I think but after a Drury, most things will seem way worse 🙂 Thanks Drury for spoiling me!